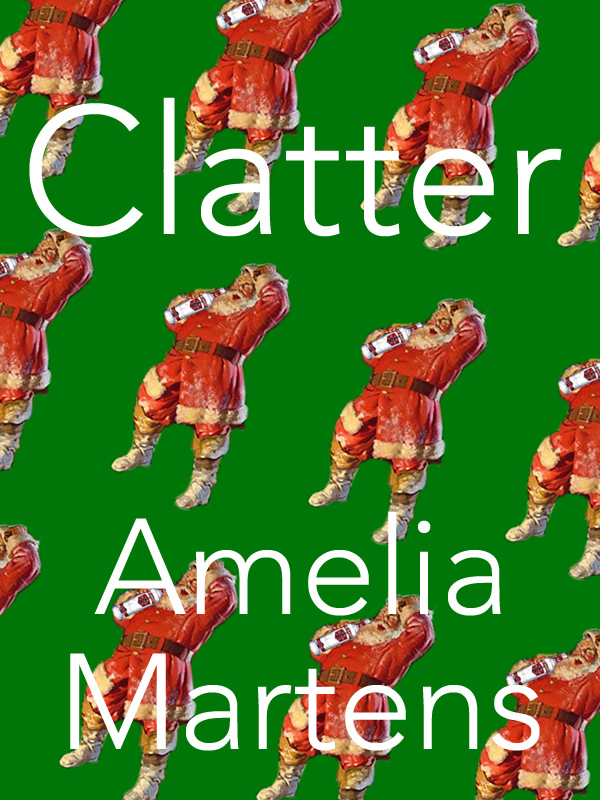 Lost in a sea of ice and
vodka, he stumbles the deck,
then hauls himself onto the couch
to sleep off the moonlight.
Discarded presents litter the carpet;
in his breast pocket burns a letter
from his wife: All the reindeer have fled,
and the sled was sold for parts.
He wakes to the screams
of children, but finds the fire
place cold, the house empty, and a plate
of gingerbread men, missing their heads.
• • • • • • • • • • • • •

As a purgatory for fathers:
a landscape void of complete satisfaction,
a place of half appreciations,
where what is missing occupies
as much importance as two AA batteries.
And all boxes arrive marked:
Assembly Required.
• • • • • • • • • • • • •

He dreams of a vodka cloud
that he rides to his mother-in-law’s house.
Out back the family is having a picnic,
so he leaves the cloud in the driveway
and walks through the front door,
past the stationary bicycle parked
for decades in the foyer with nowhere
to go, past the Buddha statue, past
the Chinese lamps, and Peruvian
tablet hung behind the television.
He can hear the voice of his wife
as she calls out ingredients
for her famous potato salad. His mouth
begins to water as he opens the backdoor,
but the yard is empty, just like the house.
A rusted scooter and two metal pedal cars
sit around a blanket, waiting.
• • • • • • • • • • • • •

Santa runs his fingers across the grout lines;
follows a fissure that ends half way up
the chimney, a root system of unnoticed
cracks. Enough, he thinks, to break
a mother’s back, if the flue backed up
and blew the house down. Santa sighs,
uses his flashlight to check the build up
of ash. He rubs a little soot behind
his ear, for good luck. There is nothing
here; the logs are cold and no one cares
about fire safety. Yesterday, he watched
a mobile home across the street burn
to the ground. Today, it’s a pile of iced
insulation, vinyl siding, and ribbons
of wiring. Inspection complete, Santa stands
on the front porch and listens to the staple
bend the condemnation notice in the wind.
• • • • • • • • • • • • •

With soot stained fingers and bits of red
brick under his fingernails, Santa slumps
in an alley of black garbage bags. In his heart,
elves beat their mallets in a four-count rhythm;
tinker toys bashed against a monolith.
He holds his iPhone like a remote
control for his life.  His finger swipes
the screen to revisit his children
and grandchildren as they smile
in the sunshine, long gone.
At night, under a newspaper blanket,
he watches videos of birthday parties,
babies aglow in their first candlelight,
presents torn open, and his heart
sinks further into the well.
He turns the camera on himself,
presses the screen to his eye
and tries to apologize in blue
lines from inside his mind.
• • • • • • • • • • • • •

140 Characters Eat Up the Night

Santa knows he’s off the radar;
NORAD has no need to track him this year.
He is not a green dot, a bleep on the screen
whose location matters to millions of children.
His whereabouts are unknown and not requested;
his sleigh days are over as the reindeer have resigned.
Toys have come to the end of their time; now
everyone wants a screen, a beam to shine in their eyes.
The sun is obscured by blue light. The moon
changes phases, but no one sees past the lines.
• • • • • • • • • • • • •

He divides his provisions
and calls himself an island.
Signs are posted on the beach:
Everything Must Go:
An open suitcase displays
mismatched socks and mistletoe.
Name Your Price:
A wreath made of plastic
six-pack rings and loaded dice.
Swim At Your Own Risk:
A rusty bottle opener kept
company by a crossed out list.
He settles back in the shade
to wait for customers;
sharks circle his gray matter.
After the fifth umbrella drink,
Santa goes on a shopping spree
and buys up the littered landscape.
At these prices, he thinks
who needs to change, why wait
to supply demands.
• • • • • • • • • • • • •

With a whalebone knife in his thinning hand
Santa slices a squid in half, wonders where
the tiny bit of ink was first written
that holds him to this land.
He coats the squid in Cajun spices.
The open fire makes the oil sizzle
as Santa drops the halved body
into a soot black pan.
He still believes there is no redemption,
no way to walk back across the coals.
He watches the animal fry
and never sets his Mai Tai down.
• • • • • • • • • • • • •

Instead of writing messages, Santa yells
into each empty bottle and jams the cork
back down. Like a big league pitcher,
he hurls them out to sea.
Mornings, he pours a little
bourbon in his coffee, laces
his boots, and begins his daily search;
checking the railroad tracks
for bits of string, abandoned packaging,
chunks of coal pulled from the earth
by machine, the detritus of boxcars
tossed out by a bump in the track:
anything unexpected
that he can use to fill his sack.
• • • • • • • • • • • • •

There will be nowhere else to be
and Santa’s glass existence will smash
against the sidewalk in the last failed factory
town, where tire swings make no sound
as they sway from burned out oak trees.
Buttons will collect in puddles
where the bodies of snowmen succumbed
sideways; their lazy coal eyes carried
away by the saw-cawing crows.
A single red mitten, like a bloodstain,
will mark the driveway where Santa’s mind
rewinds to the night when all was a clatter.
Abandoned, the streets won’t give a damn
about what one old man thinks is the matter.
Overhead, icicles drip drip drip into icepicks.
• • • • • • • • • • • • •

A Steak Knife in His Hand

Santa wakes up with a face full
of gravel and a mouth of cotton.
The sunlight is electric to his sockets
as he sits up sideways in a driveway.
Up the hill, a house is guarded by gnomes
and plastic flamingoes with alarm
in their eyes. An emptied fifth of gin
falls from Santa’s pocket.
Somewhere his daughter makes a list,
checks it twice, and trims him
from the family tree; her children will know
only stories, cleaned up to deflect
a mythology built on vodka soaked yule
logs and a hearth that glitters with glass.
• • • • • • • • • • • • •

With a pocketknife left over from his previous life,
Santa carves a piece of driftwood. In his hands
two children form and he sets them upright
beside him on the rocks. They all face the fire
as the red tide recedes in the moonlight. All
is quiet, all is bright. Oilrigs blink like Christ-
mas lights on the horizon, and beat back
the dark at the edge of Santa’s mind.
He climbs back to his rooftop, leaves
the children for children to find.
• • • • • • • • • • • • • 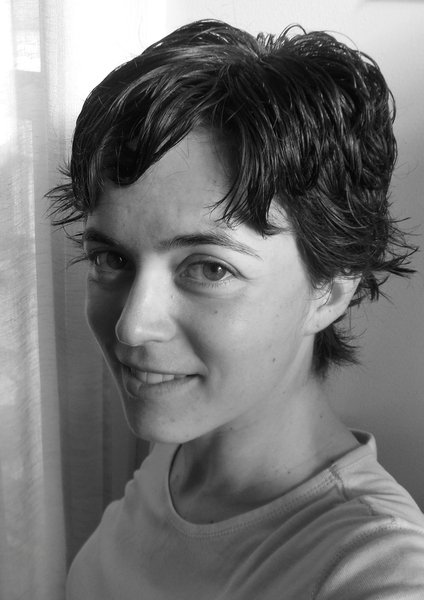 Amelia Martens received an MFA from Indiana University and works as an adjunct instructor at West Kentucky Community & Technical College. She is a co-founder of the Rivertown Reading Series, received an Emerging Artist Grant from the Kentucky Arts Council in 2010, and was just nominated for a Pushcart Prize. Recently, her poems have appeared in Bellingham Review, The Chattahoochee Review, Whiskey Island, and Willow Springs. Her poetry chapbook, Purgatory, won the Spring 2010 Black River Chapbook competition and was published by Black Lawrence Press in 2012. She is married to the poet Britton Shurley; their collaborative projects include two daughters.